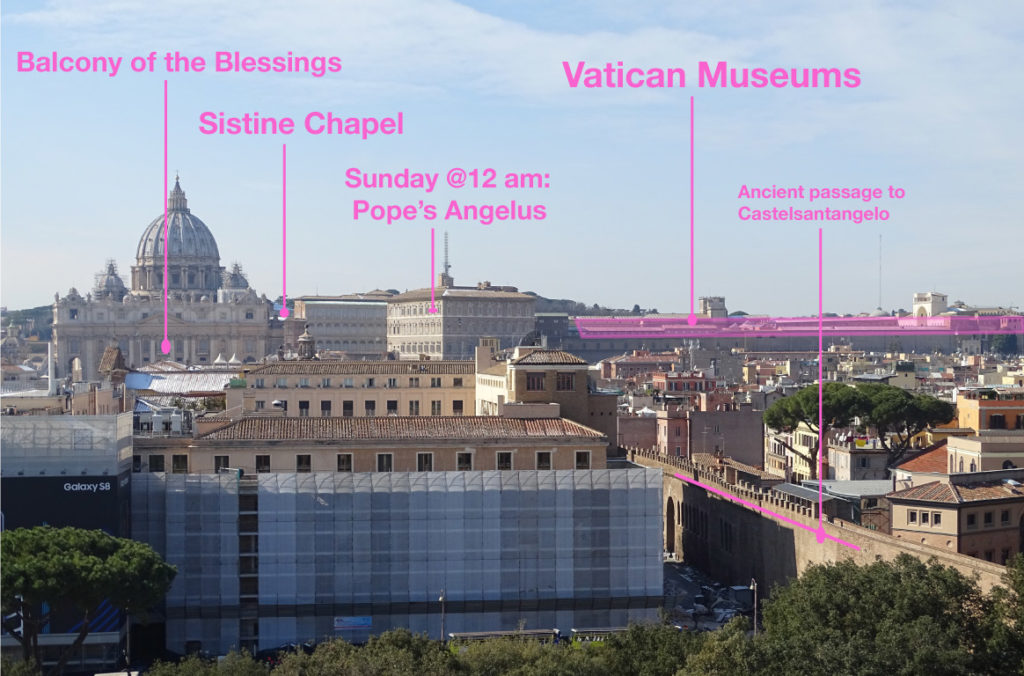 Vatican City is the smallest independent city-state in the world with only 0.44 square kilometers (0.2 square miles) and has within its borders one of the largest churches in the world, Saint Peter’s Basilica. Its establishment dates back to 1929. Its creation is a direct consequence of the unification of Italy, when the Pope lost the Papal States to the forces fighting during the Italian Risorgimento, the political movement that consolidated different states of the Italian peninsula into the single state of the Kingdom of Italy in the 19th century.

Vatican City is the only country in the world with an absolute theocratic elective monarchy. The Pope, elected by and among the members of the College of Cardinals, is the supreme power in the country and leads the executive, legislative, and judicial branches of the Vatican government.

Who lives in Vatican City?

According to the last published data (2017), 439 people live in Vatican City, 290 of them being actual citizens. To become a Vatican citizen, one must be a cardinal or work as a diplomat.

Among the citizens, is one of the most colorful armies in the world, the Swiss Guards (110 members), who have served the pope for 500 years. Their uniforms were never designed by Michelangelo (who wasn’t probably much into fashion!), as the legend claims, but by Jules Maxime Repond, commander of the Swiss Guards in the early 1900s… and yes, it’s a real army, being responsible for the security of the Pope and guarding all the main entrances to the Vatican State.

There are 6 main entry points, but only a few for common mortals: the entrances you are probably looking for are the entrances to the Vatican Museums and Saint Peter’s Basilica, or the Petriano entrance (left-hand side of the left colonnade looking at the obelisk in Saint Peter’s Square), if you are going to attend a Papal Audience when held indoor (in the Hall of Paul the VI). If you have to collect your Papal Audience tickets, you will have to go first through the metal detectors in Saint Peter’s Square and then head to the Bronze Door, which is located on the right-hand side of the Basilica of Saint Peter, just past the security checks.

What can I see inside Vatican City?

Now, unless you are a diplomat or a cardinal, the only part of the Vatican one can visit are the Vatican Museums (on a guided tour or on your own), comprising the historical palace, once home of the popes, with the popes’ art collection and the Sistine Chapel, and Saint Peter’s Basilica. To visit the Vatican Gardens, you need to be on a tour guided by the Vatican staff (you can book it on the Vatican website). In this latter case, you can stay inside the Museums after the tour of the gardens ends, without paying for other admission tickets.

How can I visit the Sistine Chapel?

The only way to visit the Sistine Chapel is to buy tickets for the Vatican Museums as the Chapel is part of the Museums itinerary. It’s located at the end of a long series of corridors in the Vatican palaces. On a crowded day, it will take you around 30 minutes to reach it without exploring other areas of Museums.

How can I get the Vatican Museums tickets?

It’s always wise to prebook the admission tickets for the Vatican and on the day of your visit you will reach the entrance in Viale Vaticano at the specific time of your booking and with the print or screenshot of the PDF booking.

Dress code for the Vatican and admission

There is no dress code for the Museums, while you need to cover your shoulders and knees (but let’s say that knee-length pants for men are fine) for the visit to the Sistine Chapel and the Basilica. In the summertime, the Vatican Museums are visited by thousands of people a day and there is no air-conditioning (except for the Sistine Chapel), therefore you may want to bring a shawl with you to use only when required.

Before entering, you will have to go through security. Only compact umbrellas and medium/small size bags can be taken inside the Museums. There is no specific indication regarding the exact size, so anything deemed too large by the Gendarmes will have to be left at the checkroom. This implies a drawback: the Vatican Museums checkroom is located at the entrance to the Museum while you will probably end the tour at the Basilica (20 min to walk back to the Museums entrance). One of the good reasons to take a Vatican tour is that you will skip the line to go into Saint Peter’s Basilica (or the dome) directly from the Sistine Chapel. Please, note that if you’re visiting the Museums on your own, you won’t be allowed to take the shortcut exit to Saint Peter’s Basilica but we’ll have to reach Saint Peter’s Square and go through security checks.

If you are visiting Vatican City and need to use a wheelchair, there are specific paths to follow due to the logistics and the limited number of available elevators. Furthermore, access to the Basilica of Saint Peter (on a guided tour) is usually from the Sistine Chapel via stairs but the wheelchair cannot be transported on these stairs.

You can bring strollers into the Museums but not inside the Basilica. You need to leave them at the Basilica’s checkroom. Overall, there aren’t many places to sit down during the visit, which involves a lot of walking and standing. Wear comfy shoes and bring a bottle of water with you!

Whenever Pope Francis is holding mass in the church or the Papal Audience is held in the square, the Basilica cannot be visited.

The tombs of the Popes and the tomb of Saint Peter

These are 2 distinct places.

The reason why the Vatican is located in this part of Rome is because Saint Peter’s Basilica is built above an ancient Roman cemetery (the necropolis).  The tomb of the apostle Peter, the first pope of Rome, is located exactly below the papal altar. It can be visited only by booking a tour through the Vatican.  You need to write to the SCAVI OFFICE: http://www.vatican.va/roman_curia/institutions_connected/uffscavi/documents/rc_ic_uffscavi_doc_gen-information_20090216_en.html

sending an email (long) beforehand to the address you will find at this link. On the day of the visit, you will reach the Petriano entrance (where you will find a couple of  Swiss Guards) bringing your ID and a copy of the reservation obtained from the SCAVI Office.

The cost to visit the Tomb of Saint Peter and the necropolis is app 13 Euros per person. It’s an incredible experience for its religious but also historical and artistic importance.

As for the tombs of the Popes, they are accessible from inside the Basilica, close to the bronze Baldachin, and there is no fee to pay. Not all the popes are buried here. Several papal tombs can be found in other churches scattered throughout the city of Rome. Pope John Paul II is buried inside Saint Peter’s Basilica in the right aisle.

How can I see Pope Francis?

There are 2 ways to see the Pope. You can see Pope Francis during the Papal Audience (on Wednesday morning), by reserving your tickets on the Vatican website:

Or in Saint Peter’s Square at 12 o’clock  on a Sunday for the Angelus; no tickets are required in this case.

Pope Francis is very popular, so expect large crowds for both events unless you are coming in the low season. In this case you may try to get the tickets directly from the Swiss Guards at the Arco delle Campane (by the Basilica’s exit), kindly asking them.

There are over 60,000 artworks on display at the Vatican! Let us guide you on a journey of discovery and wonder of one of the most visited museums in the world.

In order to get the most out of your visit to Vatican City and the Vatican Museums and to take advantage of the skip-line access, read more about our tour of Vatican Museums and Saint Peter’s Basilica here: https://www.seeromewithme.com/vatican-museums-sistine-chapel-st-peters-basilica/

For those who’d like a more extensive visit to the collections of the Vatican Museums, there’s also an extended version of the tour. Read more on the extended Vatican City tour here: https://www.seeromewithme.com/vatican-museums-sistine-chapel-st-peters-basilica-extended/