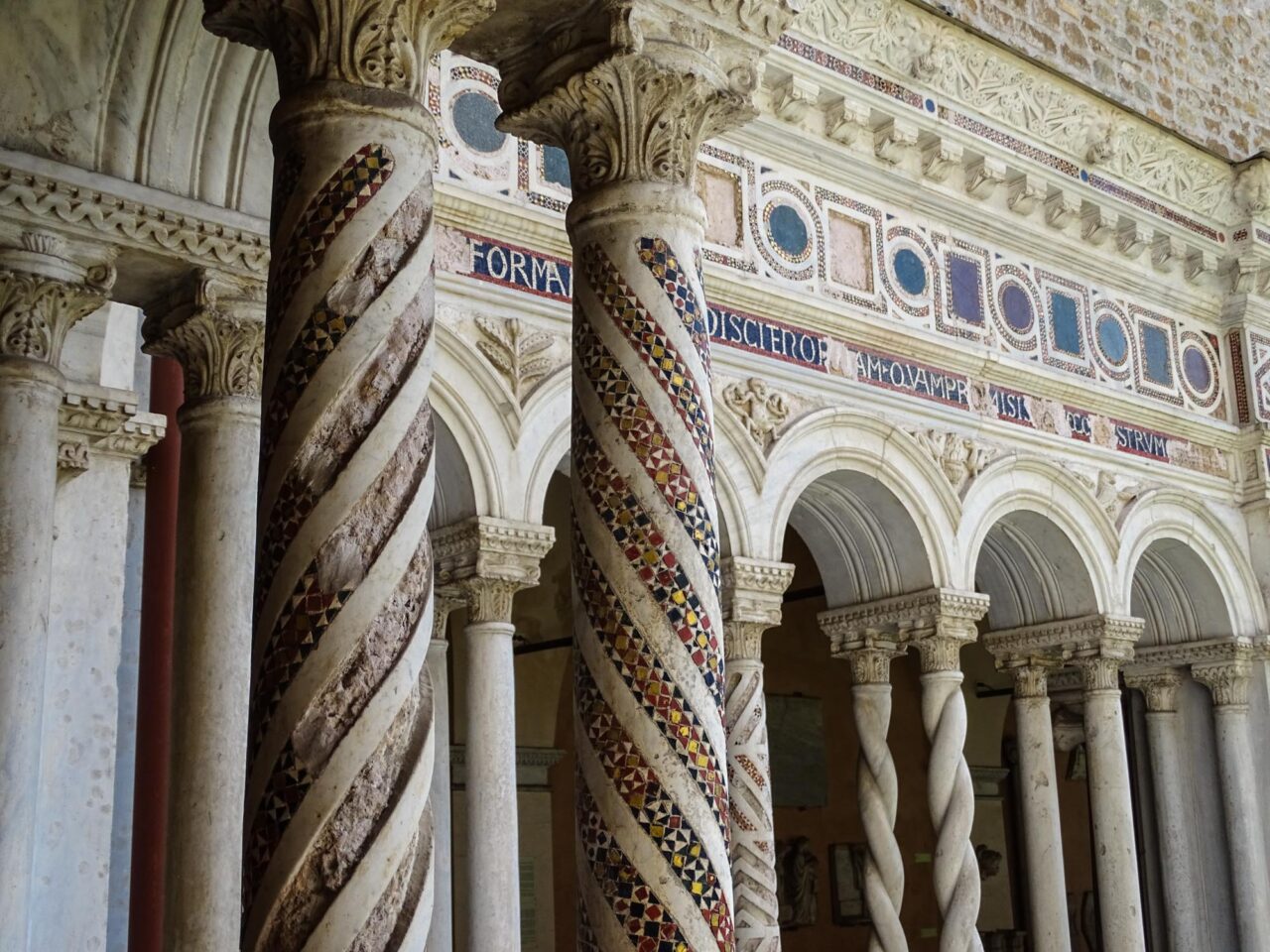 Posted at 17:28h in Churches by marta

After visiting the Colosseum, the Vatican Museums, after throwing your coin in the Trevi Fountain to guarantee your future return to Rome, there are still plenty of things to see and places to discover in the eternal city. Away from the large crowds and the bustle of the main squares of Rome is the cloister of Saint John the Lateran

I love the quiet of some Roman churches, especially when they hide real gems. One of them is exactly the Basilica of Saint John the Lateran. To be more precise, the name is Archbasilica of the Savior and Saints John the Baptist and Evangelist at the Lateran.

Considered the Mother Church of all churches in the world, it is here that the Pope of Rome has his cathedra as Bishop of Rome. Saint John the Lateran was built on a site donated by Emperor Constantine soon after the Battle of the Milvian Bridge (312 AD).

This area is called Lateran because it was originally the estate of some Laterani family, confiscated in the I century AD and then reused to build a cavalry camp in the early III century. Part of this land will be also occupied by a palace, the Domus Faustae, allegedly owned by the wife of Emperor Constantine.

After the battle of the Milvian Bridge, both the palace and the military camp were torn down to make room for the new basilica, the first major Christian building in Rome, consecrated around 324 AD.

The church underwent massive renovations over the centuries and today it welcomes pilgrims and visitors with an impressive XVIII century façade topped by the statues of Christ the Saviour and the 12 Apostles.

The Basilica of Saint John the Lateran houses important relics such as a cedar table, which (according to tradition) was used for the celebration of the Lord’s Last Supper. In the portico, the main entrance features one of the few ancient Roman bronze doors still existing. The door was moved here from the ancient senate house at the Roman Forum.

However, many visitors once inside miss the medieval cloister of the Basilica, which is one the most beautiful architecture of this type in Rome.

The cloister of saint john the lateran

The entrance to the cloister of Saint John the Lateran is located at the end of the left aisle near the transept. There is a desk to pay for the 2 € admission ticket (while the entrance to the Basilica is free). It’s open between 9 am-6 pm.

The biggest medieval cloister in Rome, it was built between 1215 and 1232 to be used by the Canons Regular, priests who followed the rule of St. Augustine. They would come here to pray or chat.

After the decline of the Roman Empire, Rome’s magnificence faded away and churches suffered sacks, fires, and lootings. But during later renovations reusing colored marble (but all type of marble in general) from ancient Roman buildings became a popular habit. In Rome, there were 2 main families of marmorari (marble workers) in the XII-XIII century: the Cosmati and the Vassalletto. The cloister at Saint John the Lateran is the work of the Vassallettos, who, unlike the Cosmati, decided not to reuse spolia here.  As a matter of fact, not oly did the marmorarii look back at the ancient Roman inlaid colored marble panels but they reused them to embellish churches floors and furniture.

The cloister features a gold mosaic inscription on a blue background running the south side, just above the arches of the marble columns. These verses address the canons on the theme of the relationship between the symbolism of the cloister design and the monastic life.

Pietro Vassalletto’s son signed the work on a pier in the south walk below the mosaic inscription: “Nobly trained in his art, Vassalletto began this work with his father, which he finished himself alone”.

In the middle of the cloister, there is a marble water well that dates to the IX century and was in the preexisting cloister.

What I really like doing here is spending time looking at the little columns supporting the arches: all arranged in pairs, they have different shapes, some are twisted, some are entwined, and others are decorated with gleaming mosaics. Some of the tops of the columns are carved with typical medieval imagery, foliage or animal designs (historiated capitals).